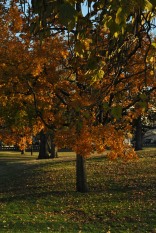 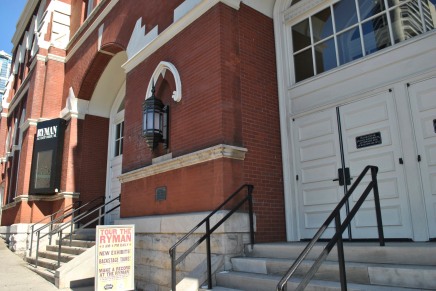 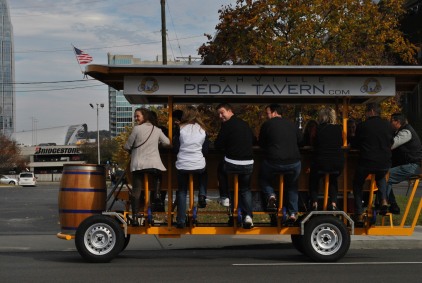 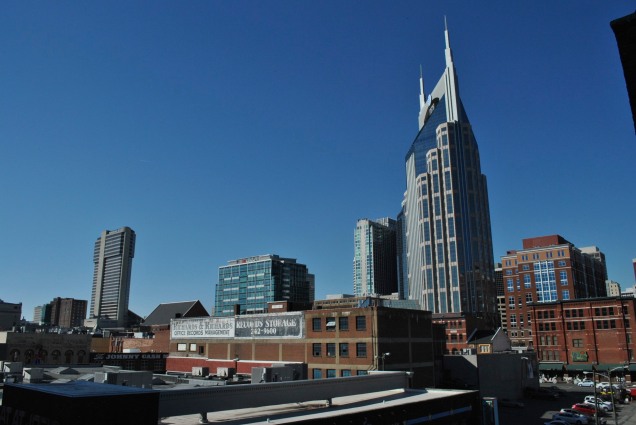 Last weekend I took a short three-day trip to Nashville with a few friends.  I hadn’t been there since 1999, so I was definitely due to visit again.  I absolutely love the South!!!  Everyone is so friendly and the music and food are excellent!  Nashville is such a nice town and it’s a place where you can just have a good time and enjoy the laid back vibe. On our first day, we made a beeline for the Pancake Pantry, which is a Nashville institution.  There was about a 45 min. wait, but it moved pretty quickly and there was plenty of hot coffee outside to keep us warm.  After breakfast we toured the Country Music Hall of Fame and caught a Grand Ole Opry show at the Ryman Auditorium, which is the “Mother Church of country music.”  If you love learning about country music, both of these places are highly recommended and are a good mix of old and new country artists.  We hit up Broadway, which is the main drag in town and hung out at a few honky-tonks drinking some fine Tennessee whiskey while we rocked our cowboy boots.  When in Rome, right???!!  I can see where the nickname “NashVegas” comes from with all the lights, music and crowds on a Saturday night!  The nice thing though was that everyone was just out having fun. Once Sunday morning rolled around, we headed out for a little country version of eggs benedict at Puckett’s off of Church Street.  We didn’t really have any set plans, but we decided to go check out the main Grand Ole Opry and the Gaylord Opryland Hotel, which were a short taxi ride from downtown.  The hotel is massive and you can easily get lost inside, but it was neat to check it out and say that we’ve been.  We had some issues finding the Grand Ole Opry (because there really aren’t any signs for it from the hotel), but once we did, we realized…..it was closed!  It was kind of like National Lampoon’s Vacation standing outside of Walley World looking for a moose to punch.  At any rate…we can say that we saw it.  After that, we headed back towards the city and stopped at the full-scale replica of the Parthenon across from Vanderbilt University in Centennial Park.  The park was lovely this time of year with the fall colors and crisp fall weather.  The Parthenon was quite fascinating….but just seemed so out of place.  Strange.  We headed over to the Bluebird Cafe to catch Sunday night’s show.  My advice is to be sure to get in line early because the cafe is very small and less than 100 people make it inside.  We were lucky enough to get in for the evening show, but it was a close one!  That night was round two on Broadway catching some great cover bands in the bars and just chilling. You just cannot be a mediocre band in this town!  Oh…and you can’t forget the stop at Savannah’s Candy Kitchen for a pecan carmel apple….YUMMY!! We got a late start on Monday but we did catch the Veteran’s Day parade outside of our hotel before we headed to Jack’s BBQ on Broadway!  I loved the BBQ & especially the Texas style spicy BBQ sauce!!  We walked around town soaking up some rays and headed down to the bridge over the Cumberland River to check out the sights from that part of town.  Nashville really is a charming city!  While my friends were enjoying the sunshine, I headed over to check out the Johnny Cash Museum.  The museum is small but quite interesting if you are a fan and there is a lot of personal memorabilia on display.  Some of my favorite items were Cash’s handwritten lyrics and numerous Grammy awards.  I also enjoyed checking out Johnny Cash’s original artwork.  We topped off our trip with yet another trip to the Candy Kitchen (don’t judge).  We couldn’t help ourselves!  The pecan carmel apples were just so good! The sunshine, music, food and people were all well worth the trip to Nashville.  It’s a unique mixture of hipsters and aspiring musicians, but ultimately this town has a unique Southern vibe and is the perfect place to spend three days with a group of close friends.

Welcome to my new blog!